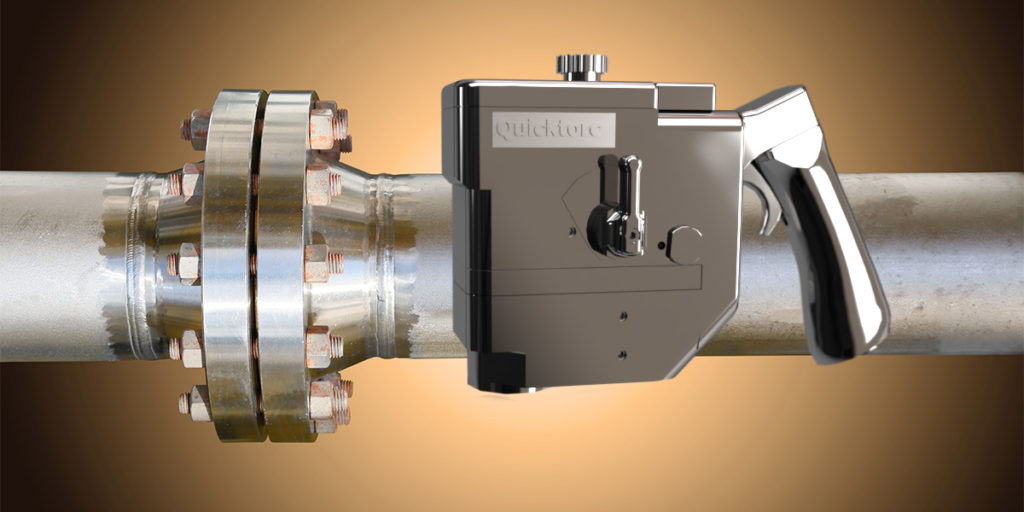 With the Quicktorc solution, the industry 4.0 standard is entering the traditional tool maker industry. Combining an innovative new mechanical tool with information technology and a disruptive new business model, we have created the 3-step rocket to take the industry to the next level.

The Quicktorc solution reduces time consumption by 75% compared to the methods used by industry today and provides major cost savings in building, maintenance and audits of industrial plants.

Quicktorc is not “just another piece of hardware” but an integreated solution to change a traditional business.

The Quicktorc tool have automated the four steps procedure used by existing tools.

A MCU combined with actuators and sensors, controls the procedure and secure a fast and accurate result every time. Without the possible human errors on today`s tools.
The tool is designed with a changeable insert to cover a range of bolt and nut dimensions.
In the future the product range will be expanded to cover a large range of different sizes.

Step in to the industry 4.0 world in piping industry

Tensioning as a Service
Pay for the work done – without the investment in tools.

With the detailed level of data recorded, it`s possible to support a new business model we call “Tensioning as a Service” TaaS.

Our ambition is to provide a ecosystem with tool rental and cloud access as an integrated packet.

Documentation of audits and maintenance is important to secure operation and environment. With the Quicktorc solution, you will be able to get this in real time.

With the built-in sensors, the hole tensioning process is recorded and stored. With the today’s technology, it`s possibility to upload these data to a cloud solution in real time, and enables a totally new way to document every bolt tensioning on every flange.
This Industry 4.0 solution will be integrated with a cloud solution and the data sets will be accessible on several different platform. This represents a radical improvement in quality and maintenance management for the plant owners and leads to improved cost-effectiveness.

The idea for the tool Quicktorc was sown by a nestor in piping in Norway in connection with the work with Quickflange.

The existing methods for working and tightening bolts are very time and costly. If that process could be simplified without compromising on the quality standards established in the various industries, it would be a major step forward.

The serial inventoer Hilberg Karoliussen never completely let go of that challenge and in the summer of 2018, the tool was ready to be applied for a patent. In this connection, the company Patentec Quickdrive As was established and the rights to the invention were transferred to the newly established company. The company changed its name in 2021 to Quicktorc.

In the first phase, priority has been given to clarifying the patent situation and a solid foundation has now been established around IPR. Norwegian, European and global patent applications have been completed and patents have been granted in all areas. At the beginning of 2022, there are processes that will lead to national validation in 22 countries in addition to the Norwegian patent that was granted in December 2019.

Throughout 2021, the company has done considerable work in digitizing the analog design and developing a good business model for the entire digital universe Quicktorc will offer. With a solid patent situation, a digitized data capture and a disruptive business model, we have reached the point where we want to realize the great potential that lies in the company’s technology. On this journey, we welcome both financial and industrial partners.

Hilberg Karoliussen is a series inventor with an impressive number of international patents. He is the originator of inventions such as Quickflange and Delta V Seal which are commercialized in various companies. Quicktorc is the latest invention in the series of Piping. He is also the inventor behind a radical new engine design, LRT Engine. The rights to this are in Patentec and the company’s first prototype is operational in the test bench these days. Feel free to read more at patentec.no

Svein Aasen is a former CEO of Patentec and has a varied background from large organizations. Among other things, as sales director in an international IT company. He has also been central in the development and implementation of a cloud-based sales tool, CRM national and Norwegian representative in international project for implementation of European CRM system in addition to the developement and quality assurance of data warehouse based on Business Objects. He sits on the ownership side of Quicktorc, sits as a board member and is affiliated with the company on a consulting basis.

Baard Alsaker is CEO / CTO of Patentec and has a varied engineering background from the Oil & Gas industry for many years and has, together with the other engineering resources in Patentec, been important contributors in putting together the overall Quicktorc concept.